Hay fever is a common condition that can occur at any point during you life. As those that suffer from the condition know, it can be extremely irritating and exhausting. So, for the month of June, London Doctors Clinic is raising awareness of the condition, as well as how to deal with it!

You’ll be able to find lots of information on our blog:

Follow this simple flow chart to help distinguish whether you’re suffering from a cold or hay fever.

It is the that time of year, these symptoms could be either due to hay fever or the common cold, so how can you tell the difference? With two very different treatments for these two conditions it’s important to get the correct diagnosis before you can receive treatment.

To get you up to speed, here is a quick explanation of hay fever and it’s symptoms:

Hay fever or (Allergic Rhinitis) is when the body is allergic to pollen that is carried in the air. When pollen particles encounter the mouth, throat, or eyes, this can irritate the body, triggering a response. This response is the body overreacting to what it believes is an attack. So, the symptoms displayed by hay fever are like suffering from a cold!

It’s thought that around 10 million people suffer from hay fever in the UK. Hay fever seems to affect boys more than girls (however, by adulthood, this seems to balance out).

Generally, hay fever is not considered dangerous. Although, studies have shown that moderate to serious hay fever can have a serious impact on everything from exercise to academia. Hay fever is only dangerous when paired with pre-existing conditions such as asthma. Indeed, this may explain the increasing amount of asthma attacks that result in hospitalisations during the hay fever season.

The symptoms of hay fever are as follows:

We also go over some frequently asked questions:

“I think I’m suffering from hay fever. Should I see a GP? If so, when?

If you are experiencing moderate to severe symptoms, then it might be time to visit your GP. It is possible to get back to living your life with hay fever treatment!

“Other than visiting a GP, what else can I do to control my hay fever symptoms?”

There are many blogs and online articles that you can read to help in managing hay fever. Of course, nothing beats seeing a doctor, but there are simple steps you can take to make your symptoms more manageable without medication. These include…

1. Take a quick shower when you’re going inside and change your clothes. This is to ensure that you do not bring in the pollen that you have collected outside.

2. Make sure to frequently clean your pets. Pets, although great companions, can unwillingly bring pollen indoors!

4. Keep your windows and doors shut, especially when sleeping. 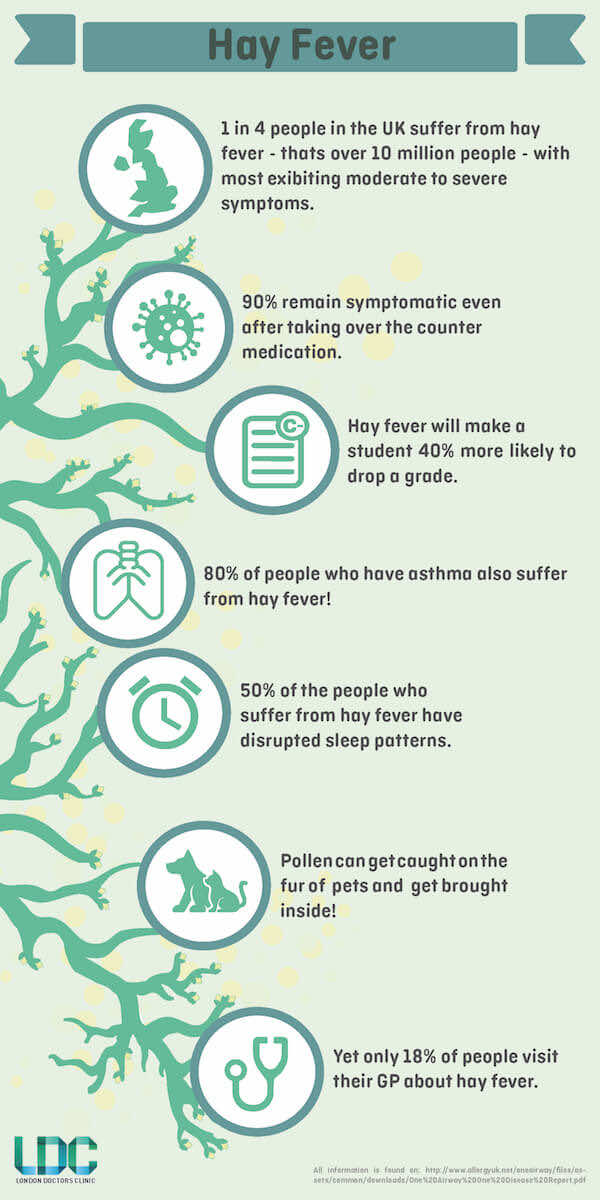