For Patients For Business Customers Become a Member

Become a Member
Use your current location Locating …
Phone lines are very busy at the moment. Please email instead.
Face Masks are required in all clinics

Mr Louis is a Consultant Gynaecologist at Luton and Dunstable Hospital (part of Bedfordshire Hospitals NHS Foundation Trust). He has been a consultant since November 2016. Louay graduated in 2001 via the United Examination Board from the Society of Apothecaries with Barts and the London Medical School. After finishing House Officer jobs, he embarked on a career in Obstetrics and Gynaecology from February 2003 that included large district general hospitals and big teaching hospitals including the world-renowned Queen Charlotte’s and Chelsea Hospital.

Louay obtained his national training number at the East of England Deanery and passed his membership exam – Royal College of Obstetricians and Gynaecologists MRCOG.

In September 2010, Louay started his PhD at the prestigious Imperial College London where he studied the role of tumour suppressor gene OPCML in ovarian cancer.

Louay completed his training in Obstetrics and Gynaecology and was awarded his certificate of completion of training in the summer of 2016.

Louay has published many papers in peer-reviewed journals as well as a book chapter and multiple presentations at the regional, national and international levels.
Mr Louis has completed advanced training ATSM in gynaecological oncology, colposcopy and minimal access surgery/ hysteroscopy. 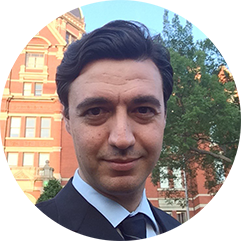